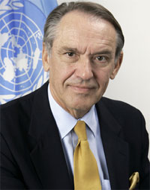 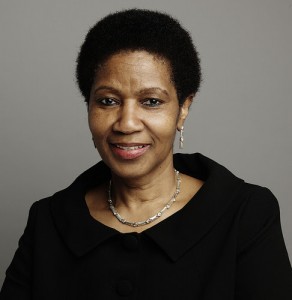 Phumzile Mlambo-Ngcuka is United Nations Under-Secretary-General and Executive Director of UN Women. She was sworn into office on 19 August 2013 and brings a wealth of experience and expertise to this position, having devoted her career to issues of human rights, equality and social justice. Ms. Mlambo-Ngcuka has worked in government and civil society, and with the private sector, and was actively involved in the struggle to end apartheid in her home country of South Africa.

From 2005 to 2008, she served as Deputy President of South Africa, overseeing programmes to combat poverty and bring the advantages of a growing economy to the poor, with a particular focus on women. Prior to this, she served as Minister of Minerals and Energy from 1999 to 2005 and Deputy Minister in the Department of Trade and Industry from 1996 to 1999. She was a Member of Parliament from 1994 to 1996 as part of South Africa’s first democratic government.

Ms. Mlambo-Ngcuka began her career as a teacher and gained international experience as a coordinator at the World YWCA in Geneva, where she established a global programme for young women. She is the founder of the Umlambo Foundation, which supports leadership and education. A longtime champion of women’s rights, she is affiliated with several organizations devoted to education, women’s empowerment and gender equality.

She has completed her PhD on education and technology at the University of Warwick, United Kingdom.

The UN Trust Fund is administered by UN Women on behalf of the UN System.

For more information on the UN Trust Fund To End Violence against Women visit http://www.unwomen.org/en/trust-funds/un-trust-fund-to-end-violence-against-women

UN Women is the UN organization dedicated to gender equality and the empowerment of women. A global champion for women and girls, UN Women was established to accelerate progress on meeting their needs worldwide. UN Women was created to be a dynamic and strong champion for women and girls, providing them with a powerful voice at the global, regional and local levels. Grounded in the vision of equality enshrined in the UN Charter, UN Women, among other issues, works for the:

·      elimination of discrimination against women and girls;
·      empowerment of women; and
·      achievement of equality between women and men as partners and beneficiaries of development, human rights, humanitarian action and peace and security.